Three things you might not know about St. Patrick 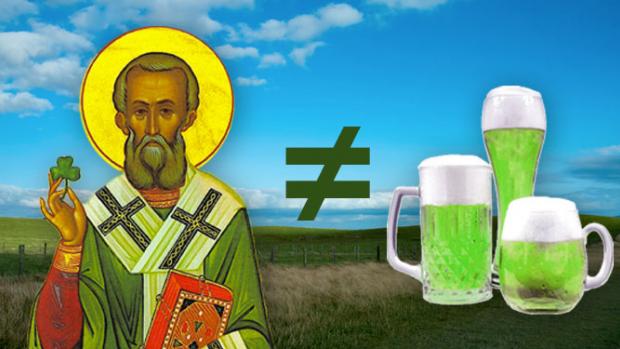 St Patrick’s Day is Tuesday, March 17th. Many college campuses celebrate this holiday by...getting drunk. However, there's a lot more to the holiday and to Saint Patrick himself than green beer, bagpipe music and shamrock shakes. As you think about St Patrick’s Day, here are three things you might not have known.

1. Saint Patrick was a missionary to Ireland

You might not know that St. Patrick is often referred to as one of the greatest Christian missionaries in the history of the Church. He was born in Great Britain in the 4th Century A.D., when it was still ruled by the Romans. As a teenager, he was captured by Irish raiders and taken as a slave to Ireland. He escaped and returned to his family after six years. He developed a deep love for his Irish captors and later went back to share the good news of Christ with the people who had oppressed and enslaved him. What radical Christianity - to go back to one’s captors with the love of Christ.

2. Until the mid 19th century, St Patrick's Day was primarily a religious holiday

The first Saint Patrick's day parade was held in Boston in 1737. Before it became celebrated by Irish-Americans though, it was first known as a "Feast Day" within the Catholic Church beginning in the mid 17th century. What is a feast day? You can read more about it here. The day was marked by families and members of the community attending church together and remembering the life and deeds of Saint Patrick.

3. Saint Patrick's Day is made for celebrating

This isn't to throw a wet blanket on celebrating Saint Patrick's Day celebrations. It is a reminder that as Christians, there's more to the holiday than leprechaun costumes and excessive drinking. It's likely that many of your fraternity brothers and sorority sisters will be celebrating the holiday by skipping class and enjoying themselves along with the rest of campus. As a Christian, how can you celebrate Saint Patrick's day by loving your brothers and sisters well, while still enjoying the celebration with them?

St. Patrick had a deep, personal relationship with Christ and lived a life centered on Christ. There's a hymn that is often attributed to Saint Patrick that offers great words to reflect on. Just thought you may like to know this as you engage the campus on St. Patrick’s Day.

"Christ be with me, Christ within me;

Christ behind me, Christ before me;

Christ beside me, Christ to win me;

Christ to comfort and restore me. Christ beneath me, Christ above me;

Christ in quiet, Christ in danger; Christ in hearts of all who love me;

Christ in mouth of friend and stranger."