Get to Know: Chase at the University of Georgia 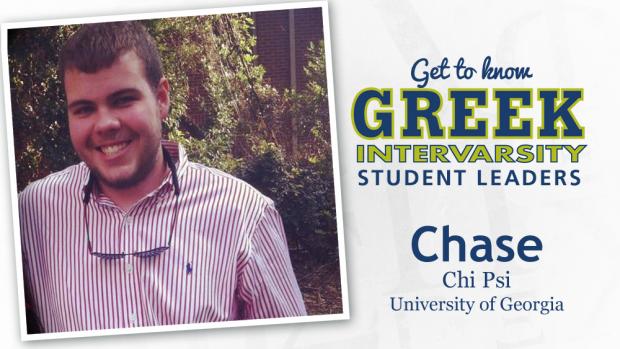 How did you first get connected with Greek InterVarsity when you came to campus?

The first time I ever heard about Greek Intervarsity was when one of my brothers, Skylar, was giving a talk about "Red Solo Cups" at the Greek IV core meetings on Wednesday nights. He invited me, and a bunch of my other brothers were already going so I decided to attend. After going and seeing how nice everyone was and how great the community was, I decided that this was something that I wanted to dedicate my time to.

What was your faith like before coming into college?

Before coming to college I regularly attended church with my family and I knew that I had a relationship with God, but I never realized how much college would challenge it. When I entered into my freshman year, I got caught up in the hustle and bustle of joining a fraternity, getting involved in UGA HEROs, and trying to live it up as a college student that I kind of put my faith on the back burner. After getting off track a bit, I found Greek Intervarsity and I was able to plug myself back into my faith. I was challenged to really try and demonstrate my faith more amongst my fraternity brothers. Since becoming involved in Greek Intervarsity, I have had to step outside of my comfort zone and be more personal with people about sharing my faith, and I think that has further developed not only my relationship with my fraternity brothers, but also with God.

At UGA, being Greek is a way of life. From chapter on Mondays to tailgates on Saturdays, we all understand both the struggles and rewards of being a part of Greek life. However, I think the best part of being Greek is the unity that we all share. We all share that Bulldog pride that resonates throughout classrooms, the Milledge bus, and even Sanford Stadium.

From the beginning I think that our staff worker, Paula Frances, knew that I wanted to make something big happen on our campus. When I first sat down to meet with her at her beloved Jittery Joes at 5 Points, she asked questions that other people had never asked me before. She wanted to see what made my heart break on campus, and what I thought about what could be done. Then, after attending Greek IV campus gatherings and becoming more involved with our activities, PF invited me to shadow one of our current leaders, Gaby. Gaby has shown me the ropes and has been awesome; I will have some big shoes to fill next year!

Last semester at this time, there was only one guy who attended Greek Intervarsity, who is actually the same guy who I mentioned before who got me involved. Today, multiple fraternities are represented and involved in Greek IV. There are even three brothers from my fraternity who have stepped up and taken on leadership roles within Greek IV. We've grown so much, and I can really tell a difference from when I first started attending to now.

One of the biggest experiences that have been key in shaping my leadership occurred at Greek Conference. I went on the Lead track, and I realized all of these steps that I could be taking in order to help further my chapter and my campus. So if you're reading this, and you haven't been to Greek Conference yet, here's your sign. Go.