Get to Know: Elizabeth at U of Northern Iowa

An Alpha Xi Delta seeking to launch a new ministry 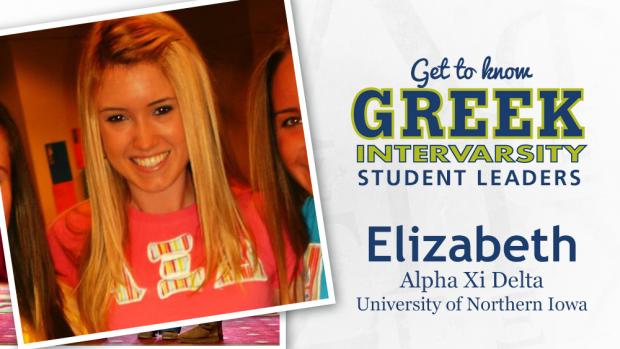 My friend and sorority sister Riley was already a leader within InterVarsity on our campus and she had heard about the Greek InterVarsity conference that was going to be held in Indianapolis. Riley and I had been friends since 6th grade, we joined the same sorority , and we also had a faith relationship. She strongly encouraged me to attend the conference with her because she felt that she and I had been called to attend this conference.

We both wanted to see a change within our Greek system on our campus, we believed that if we learned more about Greek InterVarsity we could possibly start a ministry in the Greek system.

I grew up going to church my whole life with my mom. She was my Sunday school teacher, mentor, and now accountability partner in my faith. I've always felt that I have had a close relationship with God, however my relationship with God was tested my senior year of high school and my definition of a "strong" relationship was changed. I realized after a turn of events that year that my faith was not as strong as I had thought. It was hard for me going to college and not being surrounded by people of faith anymore. I had to balance life as a college student and a person of faith. I had to make choices that would decide where I really stood in my faith. Since I have had these experiences my faith and relationship with God has grown much stronger after I let go of my control and trust in him.

What I love about being Greek is the friendships, opportunities, and memories that I have been given since joining a sorority. My college experience would not have been the same without it. I have made lifelong friendships through the Greek system, learned and developed qualities about myself that I never thought I had, and have found opportunities for leadership within the Greek system.

How have things been going on campus at UNI over the last year?

God has done amazing things for my chapter this past semester. April is Autism Awareness month for Autism Speaks. Alpha Xi Delta supports Autism Speaks, and all of our proceeds from our philanthropy events goes directly towards families with children affected with Autism, and helping fund research to find cures for Autism. We were able to get in contact with the dean of the University of Northern Iowa, and we asked for special permission to light up our school campanille blue for the month of April. Blue is the color that represents Autism Speaks. The Dean accepted our request and the campanille was lite up blue for the month of April. We also raised thousands of dollars through our spring philanthropy "AmaXIng Challenge: Xi-Man" and raised awareness in April by decorating the Maucker Union (student center) blue.

When I was younger I experienced communication and speech problems. It was extremely hard for me to build relationships because I could not communicate with anyone and I was also very shy. Since I joined my sorority, I was given the opportunity to hold the philanthropy chair position. This was a blessing for me since our philanthropy focus was on Autism Speaks, this pertained in part to my past issues I had to face growing up. With this opportunity, I was able to make improvements to our philanthropy and was able to use my leadership skills for a cause that was close to my heart.