Get to Know: Jevon at Case Western University 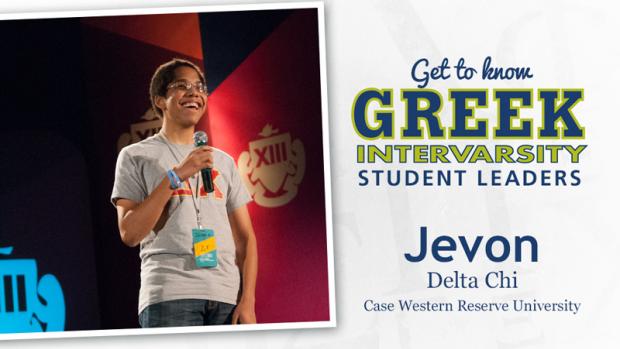 I actually helped start Greek InterVarsity at my campus! I joined my fraternity in the Spring of my freshman year. I originally had no intentions of joining Greek Life, but after a few events I really was drawn to the community, particularly the brothers of Delta Chi. Before accepting my bid, I prayed that God would use me if I joined a fraternity. I didn't really know if I should join, and I still had a lot of stereotypes floating in my mind. I eventually accepted my bid and joined the fraternity.

In the midst of my Associate Member process, both InterVarsity chapters on my campus realized that we both had multiple members involved in Greek Life. So we decided to meet over pizza once a month and talk about the challenges of being Greek and Christian on campus. Two of the girls who would come to this meeting (both sisters in Kappa Alpha Theta) decided that year that they would begin hosting a bible study in their house that following semester. From these monthly meetings, and the Spirit of God working in many of our lives, began this young chapter of Greek InterVaristy at Case Western Reserve University.

Share a little bit about your faith experience coming into college

I grew up in a Christian home. My family went to an African Methodist Episcopalian Church in Pontiac, Michigan for years before eventually going to a Baptist, and then Full-Gospel Baptist church. One of my brothers became a minster there. My Mother was highly involved, particularly with the outreach/evangelism ministry. I felt pressured to be involved as a middle school/ high school student and more or less rode "the wave"; I would go by the flow of things but never really understood everything or made whole-hearted decisions about my faith even though I had been saved and baptized since my tween years.

I had a had a life-changing experience at a Kairos retreat I went on my senior year through my High School, but this more or less opened the door to my learning more about myself, particularly in how I lived my faith. I knew I wanted to be a part of a Christian organization in college but there were many to choose from. I stuck with InterVarsity because of the community, and I was developing a friend group there. My freshman experience with InterVarsity culminated at the end of the year, after going Greek, and after agreeing to go on leadership with InterVarsity (this was before our Greek IV chapter)

where I recommitted my life to Christ at Chapter Focus Week 2012.

I think ultimately it is the brotherhood. Being a part of something that is so much larger than yourself, stretching across the whole nation under a common bond... but also having the intimacy of the close relationships built within my chapter. Greek Life on my campus is very different than most. Being a more technical school, most students come to study engineering or go pre-med. Everyone's focused a lot on their career goals. Likewise, the Greek system here puts a higher emphasis on the values and making lasting differences than other schools stereotypically might. I like these differences, but it is also cool to know that I am just as connected here on my campus in the midwest as I am to the most stereotypically fraternal Delta Chi in the deep south.

I entered my Sophomore year of College on leadership with InterVarsity's Multicultural Undergrad (IVU) chapter on campus. After a semester of becoming more involved with Greek Life, and continuing talks about birthing a Greek InterVarsity chapter on campus, we eventually went to Urbana. Urbana was where I heard God telling me to lead the new Greek InterVarsity at Case Western. This was confirmed by the IVU staff worker who asked me moments later if I would be willing to become President of the Greek IV chapter at Case. So the spring semester of my Sophomore year I transitioned from IVU leadership to Greek IV leadership.

Last semester was effectively our first semester as a chapter at Case Western. We had a birthday party and everything. We grew from a sparse group of individuals who just happened to be Greek and Christian to 9+ members helping to lead biblestudies in two fraternities and three sororities with eight Greek chapters represented in total.

Discipleship Essentials by Ogden is a great resource to develop your own discipleship, and to grow the discipleship of anyone you might be leading. I'm currently holding a weekly discussion chapter-by-chapter with my little using this book.