Get to Know: Ryn at Grand Valley State University 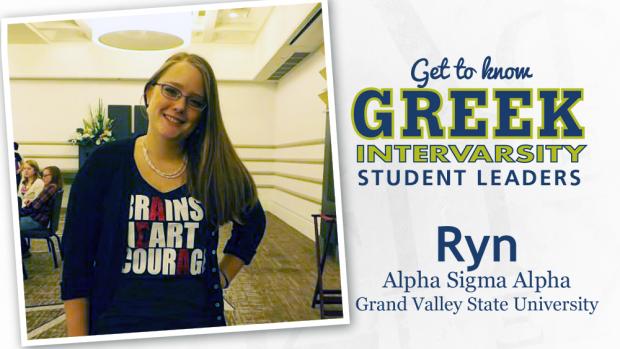 When I came to Grand Valley, we didn't have a Greek InterVarsity chapter and I didn't think I was going to join a sorority at all. I was plugged into our undergraduate chapter of InterVarsity from the start and grew in community there. After a while, God placed Greek life on my heart and after praying about it for all of my freshman year and that summer, I decided to go through recruitment in the fall of my sophomore year.

Before coming to college, I was fairly strong in my faith, but definitely had a lot of room to grow. My family had just gone through my parents' divorce and I was just beginning to learn how to navigate awkward family situations and holidays. However, God had really met me in that time and provided so much for me. He gave me a great community to love and care for me and showed me so much of His love for me.

The Greek community here is super friendly. We're pretty lucky. There aren't any big rivalries between chapters and we are just like a large family. Our Panhellenic Conference sets up sister sororities each semester with whom we have a few socials with. I really enjoy being able to get to know people from other chapters.

After praying about joining a sorority for a year, I went through recruitment in the fall of my sophomore year. I wasn't quite sure why I was joining, but I knew that God wanted me there. So, I joined my wonderful sorority and found such great family there. Then, during a weekend conference called Compelling, God changed everything. He had done a lot of personal healing during that weekend and helped me shift my eyes from myself up to Him and His glory. I decided that weekend that I wasn't going to play games anymore and that I wanted to pursue God harder than I had ever done before. I wanted to be like the people in my life who had helped me so much to others around me. That weekend, God ignited a fierce passion for Greek ministry in me. Since then, myself and the other IV student who went Greek with me have been planting a Greek IV chapter on Grand Valley's campus.

How have things been going on campus at GVSU over the last year?

This whole year has been incredible! God has moved so much in starting this chapter plant. When this was forming, God was bringing so many people to myself and my co-leader to help us along and support us. He gave us connections to Greeks in other chapters and has blessed us with so much encouragement from our staff workers and our undergrad IV chapter. One night we had a Bible study planned on self-worth and where we find it. My co-leader Matt and one other guy had planned on coming, but at the last minute the other guy said he couldn't make it anymore. Matt and I had both decided that it would be best if he didn't come to the study either because it could be awkward to only have one guy in a Bible study on self-worth in a room full of women. So it became a girls night. In the study we looked at where worth is found from a worldly perspective and then where it is found in God. The conversation touched on many issues that us women face in this world and even though I was leading the study, I learned so much from it and I hope that the other girls did as well.

Our staff and the staff at other schools who have been mentoring us have been so wonderful in this process of planting! I don't know how much we would've been able to do by ourselves. Our staff at Grand Valley, Derek, Mike and Becca, have been super flexible in everything that we've done on campus this year and have been walking through this unexplored area of campus ministry with us. We've been able to bounce ideas off each other and to learn what works and what doesn't work. We've also been connected to the Greek IV staff worker, Steve, at Central Michigan and he's been a great help! He's been able to share the things that have happened at CMU and his wisdom on planting and growing a Greek chapter. The volunteer staff at Western Michigan, Bethany, has also helped us a lot too! Their Greek IV chapter is also just starting off too, so it's been really great to hear how their experiences have gone and to receive encouragement from them too. On top of that, our area director, Curt, has put together a Start Something New program for South West Michigan for all the new ministries that have started. That has been incredibly helpful! We've received resources on how to plant new ministries, how to grow your ministry and how to raise up apprentices and new leaders so that our ministry will become a God-movement, something that cannot be stopped. It's also been encouraging to meet with students who are in the same process of starting new things and to share those experiences and pray for each other. God has really blessed us with so much support from our staff and from our undergrad chapter as well!