Get to Know: Sarah at the University of California, Berkeley

Growing a ministry to Greeks from the beginning 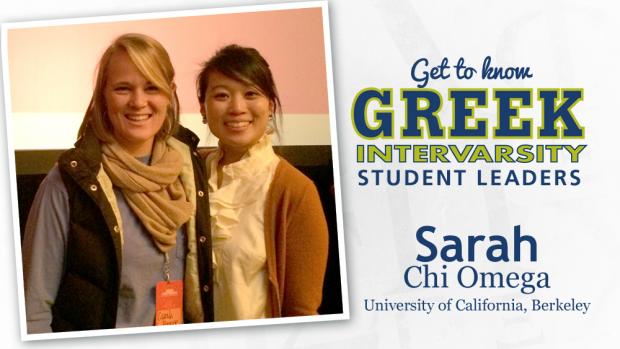 The summer before I came to Cal, I ran into a girl at my home church who is a year older than me and had been at Cal and in Chi Omega for one year. When I mentioned my concerns about how being in the Greek system might affect my faith, she told me that some ministry leaders were actually hoping to start a fellowship for Christians in the Greek system in the upcoming year. Once at Cal, I became a member of Chi Omega and got involved with the brand new Greek ministry, which would later become Greek IV at Cal.

What was your faith like before coming to college?

I grew up going to an Episcopalian Church but I was first introduced to the idea of having a personal relationship with Christ in my early teens while attending a summer camp near Yosemite, which I ended up attending for 5 summers. During my freshman/sophomore year of high school I went through a pretty rough time, specifically struggling with body image and self-worth. At one point, while on a family vacation, I had sort of "reached my breaking point," and without really knowing what I was doing I began to pray to God. This was the first time that I really heard God speaking to me and it was at this point that I consider when I gave my life to Christ. After this, I began attending Calvary Chapel Santa Barbara and got involved in the youth group there and started to grow in my faith.

All of the women in my house are so incredibly inspiring. I love that we all have Chi Omega as a foundation in our life, as a community within the larger community at Cal, but that we also all are so involved in so many other things on campus. I am constantly inspired by my sisters to continue to grow, learn, and pursue my dreams. In addition, I love being a part of the Greek system as a whole because I love how it is so rooted in long-standing values and traditions.

I have been involved in Greek IV since it first started four years ago. Because I got involved when it was just starting, I have always had a leadership position in Greek IV, mainly because I was a returning member. But over the years I have been developed into a better leader and have been part of helping Greek IV to become more rooted on campus and grow in number. This year I have led a few discussions and have shared our vision of what Greek IV can be with the group.

Going to Greek conference with about 10 people was really incredible! Seeing the group go from a very nebulous, small Bible study to a solid group of Greek believers is awesome and I feel that God will continue to grow us as a chapter. In addition, one of the Greek chapters on our campus has a thriving Bible study in the house led by a member of Greek IV; it has been incredible to see the way God is moving in their chapter. There are a few non-believers who consistently attend on a weekly basis in search of more information on walking with Jesus. Two of them attended Greek Conference in February!

I have become close with Becky, my Greek IV staff, especially through experiencing the growth of ministry to Greeks together. From leading a Bible study to sustaining my heart and compassion for the Greek system, her leadership has shaped mine in many ways.

My leadership has also been shaped by participating in and leading a Christ-centered dance group called Abba Modern. Both Abba Modern and Greek IV are focused on specific communities, the dance community and Greek community, and seek to reflect God's glory and shine His light through real relationships with people in those communities. My leadership experience in Abba Modern has reinforced my leadership in Greek IV. In Chi Omega, I have seen the way in which, by investing in relationships with my sisters, I am so much more able to share God's joy and light with them.