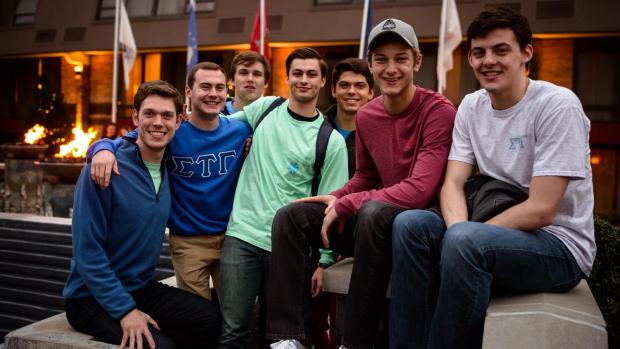 It’s Thursday night- thousands of Greeks are defying 2,000 years of Roman Calendar tradition by starting their weekend two days early. The sound of music and the smell of beer mixed with other burning substances fills the halls of the fraternity. Yet, as our sorority counterparts begin to trickle in to pregame, I find myself sketchily slipping out the back door hoping no one will ask where I’m going.

I’d rather not have to awkwardly explain that I’m going to a worship gathering on campus.

As I enter the gathering with a thousand other people, I’m met with polite smiles and questionable glances as people notice the Greek letters on my shirt. I’m quick to take a seat on my own just before the lights dim and the worship begins. After the typical music/speaker/prayer combo, I make a quick exit and walk 100 yards across campus to rejoin my fraternity brothers downtown where I’m briefed on what I missed.

THE TENSION OF BEING GREEK & CHRISTIAN

So, depending on who I was with, I resorted to either hiding my faith or hiding my letters. Maybe you can relate.

RESOLVING THE TENSION: Faith or Friends?

After nearly 15 years of living and working in the world of Greek Life, I’ve noticed there are typically two ways people resolve this tension:

On one hand, you could focus on your faith by attending the Christian gatherings and conferences, joining a small group, and surrounding yourself with people who share your faith and lifestyle.

People who take this route do grow in their faith, but sometimes do so at the expense of their connection and credibility with their brothers or sisters. They run the risk of becoming “ghost brothers or sisters” - mythical creatures that only show up on composite pictures or chapter mandated events never to be seen at any other Greek functions (and especially not at the informal get togethers that “you just had to be there” to witness).

On the other hand, you could focus on your friendships in Greek Life by attending every social event, joining leadership in your chapter, and surrounding yourself with people who share your friendships and social life.

People who take this route do enjoy great friendships with their brothers and sisters, but sometimes do so at the expense of their faith. They run the risk of becoming “cultural Christians” - equally mythical creatures that only show up to church on holidays never to be seen living out their faith in any practical way (and especially not at the informal get togethers that “you just had to be there” to witness).

But let’s be honest. Neither option is very appealing, which raises the question, “Is it really possible to be both Greek and Christian?” Is there really a way to fully invest in your faith and friendships without compromising one or the other?

A magical, fratty place where you can actually explore and grow in your faith alongside your friends in Greek Life.

Greek InterVarsity brings the best of Christian faith and the best of Greek Life together so that you don’t have to choose between your faith or your friends. You can be fully Greek and fully Christian without compromising one or the other. It’s like a mixer between God and Greek Life.

My Thursday night routine changed when I found Greek InterVarsity. For starters, I stopped taking my lonely walks across campus because I found that there were other Greeks downtown that were trying to live out their faith and follow Jesus just as much as I was.

Some of my most exciting conversations about Jesus occurred late night in crowded bars after football games. Some of my greatest faith awakening moments happened during a Bible Study led by one of my fraternity brothers. And, to this day, one of the most faith stretching experiences was taking over that Bible Study after that brother graduated.

So the next time you find yourself wondering, “Is it really possible to be both Greek and Christian?” Ask yourself...

The answer is an obvious, “Yes!”

With that being said, we here at Greek InterVarsity want to help you live the best Christian life & best Greek life possible. If you’re interested in learning more about how to be both Greek and Christian, click one of the buttons below. We would love to get in touch with you!

Find a Greek InterVarsity Chapter Near You

Get in Touch With Us