A Delta Zeta from Hartford shares her story 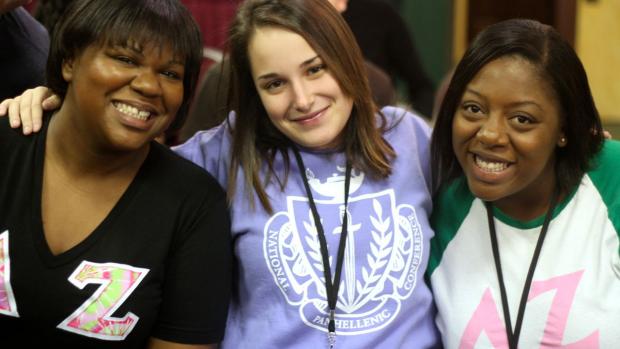 First time headed to Greek conference? Have no idea what to expect? Nervous with no idea what you’ve gotten yourself into? I was right there with you last year.

A little background information about myself, I grew up with a strong Christian family in New Jersey. We went to church most Sundays out of the year and I was involved for a small amount of time in the church’s youth group. But I could never identify with Christianity. I actually reached out to every other religion from Wiccan to Hinduism. I thought that this God character I had heard many stories about was just not suitable for my life.

If the Christian God had truly existed, how could he let me endure three long years of clinical depression and anxiety, three failed suicide attempts, and many nights of watching my mother’s eyes grow more hopeless? The God she had worshiped had turned his back on me, as I had turned my back on him. I went to college with this kind of mindset and in search of a state of nirvana through human interactions and satisfying my own needs based upon what I thought was right and not what the church had told me what was right.

Most of my college experience consisted of the motto: “Rock star lifestyle, might not make it.” I had the best friends, the best stories, was the nicest “witch”, and partied the hardest. More importantly, I was Greek. My confidence was through the roof. But it was a confidence that was gained through meeting other people’s expectations of what it meant to be cool, a sorority girl, fun, and what it meant to be Dominique. I had built the ultimate persona. I was who everyone wanted me to be when I walked into a room. Coming into my junior year, my Little had invited me to this organization called Greek InterVarsity. I laughed and asked her if she wanted her Big to burn to death. She persisted and nagged —which she is very good at, might I add—that I go, so I decided to give it a try just to shut her up. Turns out it was a pretty cool environment and provided a solace where I could learn about the Christian God without judgment.

To be completely honest, the only reason why I went to Greek Conference last year was because of my very persistent and pushy staff leader at the University of Hartford who ultimately bribed me into going. All I could think about was how this was going to be a horrible experience, but if nothing else, at least I would get a road trip out of it.

Walking into the conference, I thought I would have this giant stamp on my head that said WILD CHILD. I was very nervous, felt out of place, and really awkward in a cool kind of Dominique way. I was expecting bibles and holy water to be thrown at us. But once the weekend began everyone was so friendly and welcoming. I even found out that some were just as scared and nervous as I was.

To this day I always talk about how the second day of Greek Conference completely changed my life and sparked something within myself that I never thought existed. I really connected with the testimony that was given by Andy Dalton, the former National Director of Greek IV. I started to realize everything that was and had been holding me back: my insecurities, my ego, and even some demons that I had to face in my life. For the first time I truly felt the presence of God.

Coming back from Greek Conference I was overwhelmed with joy and was spreading that love to my chapter, friends, and family. Everyone asked me why I was so happy and I jokingly said: it’s Jesus. As funny as I was being, I was experiencing feelings I never had before. Not only had I found God, but I had found myself. My outlook on life since Greek Conference has completely changed. Having God in my life has helped me become more positive, welcoming, and loving. I’m not saying I don’t have fun anymore—I do. I’m just as fun as was before, but now I’m actually having fun. I no longer feel the need to put on a brave face to impress other people. I now know that God doesn’t need to be impressed by me being “down for the cause” and my real friends don’t either.

So, if you still feel awkward, weird, or uncomfortable about Greek Conference, I guarantee that you are right where you belong, because a year ago I was right where I belonged.

This story was originally shared live at Greek Conference Boston 2013