How I Learned to Follow God in My Sorority 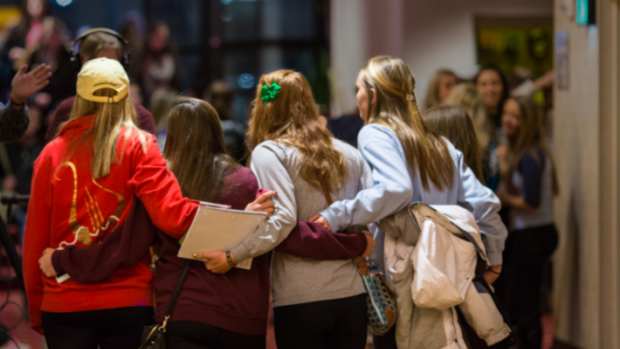 The other day I read a blog post that made me cry. As I read over a woman’s account of her sorority experience and how it drove her away from following God, I wept because she had missed out on what I got to experience in my sorority.

I grew up Christian. Like most southern families, my family went to church religiously, even when we lived in a country where it was outlawed.  My parents sent my sisters and me to Christian camp for 5 weeks every summer. I knew the Bible backwards and forwards and I called myself Christian; however, before joining my sorority, I wasn’t following God. I called myself Christian, but that meant nothing in my life until I joined Kappa Kappa Gamma.

I remember crying with Courtney, the Kappa member who I spoke during preference round in my last night as a potential new member. I do cry a lot if you can’t tell. I cried as she told me I was the kind of woman Kappa wanted in their pledge class, that they needed Christians. And I thought great, that’s me, despite the fact that I wasn't following God and there was no evidence in my life that I was a Christian. My life looked like every other freshman, my RA caught me with alcohol in my dorm and I lied; I spent most Thursday, Friday, and Saturday nights with my friends doing exactly what they did, actions that did not honor God. I never thought about whether shacking up was good or not, because I never considered asking God about my relationship with my boyfriend.

I knew who God was, but I didn't fully understand that Jesus was my LORD and Savior. I didn't understand that his death and love gave me freedom that should be evident by the choices I make.

I heard God say to me, "I’ve called you to bring my Kingdom here and to everywhere I send you".

A couple weeks later, after becoming friends with Courtney and other Christians in my sorority, I saw that they were different. They didn’t care what others thought about them, because they were so sure of who Jesus is and that he loved them. They lived a life that looked different. They still went out with us, but they didn’t act like everybody else. The Christians in Kappa were loving and kind, when others were selfish. And Courtney did something weird, she constantly told people about God. I remember telling the Greek IV staff I wanted to be like Courtney.

Over the semester of watching Courtney, attending Kappa Bible study, meeting with other Christians who were also in fraternities and sororities,  I began to follow God.

My junior year, I got a chance to lead the Bible study in Kappa. Through leading it and partnering with what God was doing in our house, I learned how to be bold with my faith and to stand firm in what I believed. Through developing relationships with my sisters who were not Christian, I learned to love with grace. Then in February, a crazy thing happened. A sister I love and admire, Jenny, accepted Christ as her LORD and savior, and on that Saturday night, I heard God say to me, "I’ve called you to bring my Kingdom here and to everywhere I send you." My first two years in my sorority I learned to follow God, my junior year I learned to partner with him in his mission.

Because I was in a sorority that gave this opportunity, I was able to go on my first mission trip to Haiti, I was able to serve the poor in Atlanta. Through my sorority, I learned to be a leader for the LORD. My sorority taught  me how to live a life of joy and how live in community. Even the dreaded week of recruitment taught me how to follow the LORD as I learned to be a servant leader. My sorority taught me to bring God’s kingdom everywhere I go.

I don’t believe Greek Life is for everybody. However, I do believe that if you are open to God’s adventure he will radically transform you wherever you go. For me, he used my sorority experience to turn me into a missionary.