Our Relationship with Money

Is it Good or Evil? 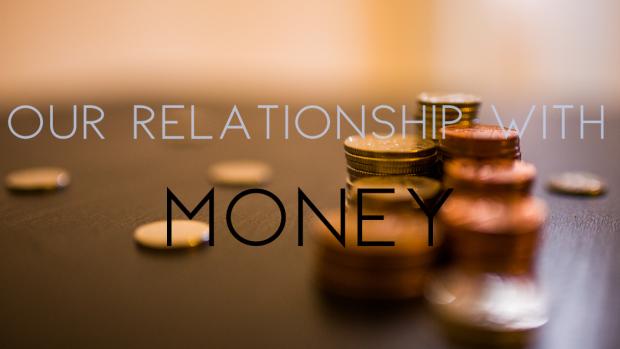 It’s the root of all evil.

It makes the world go round.

It’s why you choose certain jobs.

You hate it because you never have enough; it causes you to feel inferior to those who have more.

You love it because it allows you to buy stuff and experiences.

It makes you feel like you’re worth something when you have it.

Everybody has a relationship with money; only those who have it are naïve enough to think it doesn’t matter.

Everybody has a relationship with money; only those who have it are naïve enough to think it doesn’t matter. Without money you cannot attend college, join a fraternity or sorority or even afford the computer, tablet or phone you're reading this blog on. Money allows us to operate in this world. It gives us resources and power.

My senior year, I traveled to Haiti with Greek IV for a mission trip. I left my apartment in Atlanta that I shared with two of my friends. The apartment had three rooms, two bathrooms, a kitchen, a living room with a huge TV and a dining room.I had so much stuff that clothes and shoes were literally pouring out of my closet, all of it was given to me by my parents.

In Haiti, I met wonderful men and women who considered a one room house big. Running water was a luxury; running water meant a spigot went to their front door. And like me, they inherited this situation. While there, I saw first hand how the wealth I was born into gave me opportunities and a life that many could never dream of.

Money can be good. People with money have funded amazing organizations that have provided food for the hungry, clothes for the poor, bringing God’s kingdom here with every gift. However, money has also been used to disenfranchise whole groups of people- creating divides among the poor and the rich- bringing hurt, pain and injustice into the world.

And no matter who you are, it matters. So how do we relate to money in a way that is honors God?

Let’s start with recognizing what money is: Money is something generally accepted as a medium of exchange, a measure of value or a means of payment. Its value is defined by a government, which means that it has no intrinsic value. The worth we place on those notes is defined by how much we can trade it for goods. Or in other words, money a way to get what you want.

Money is a thing that we attach value to in order to trade for goods and services, so it is not evil or good, just a tool to operate in this world. It’s really just a symbol of wealth.

If it’s neither good nor evil, how do we relate to it?

Putting Money in Its Place

Money comes from God and it is a gift he freely gives us so that we can do his will. According to Drew Larson in the blog, Money 101, “The truth is that money is a paradox: it is simultaneously a gift that God has given you that you can use freely and something that still belongs to God.”

When I returned from Haiti, I remember agreeing to live more simply. I began to give away everything and even decided to get my haircut at “Great Clips”. I wasn’t giving money away out of a love for the Haitian people but rather because I hated the wealth I had been given; I felt guilty for having more than my new Hatian friends.

The guilt began to eat me away, until I spent some time with Jesus. I remember him telling me, “I love you. The money you have is a gift, I want you to use it.” When I saw my money as a gift, I was able to use it freely and give it out of a sense of love. I still strive to live simply, but I have the freedom to get a good haircut.

If we remember that money a gift from God and that it comes second to God, we are less likely to idolize it.

Idolizing money takes many shapes and forms. Some of us who idolize money actually hate it, making it more important than God by demonizing it and not trusting that God has authority over our financial situation. Others of us idolize it by believing that it is what we should live for, striving to grow our bank accounts at the cost of following God.

Money should be seen as what it is; a symbol for wealth that is given by God. Not something to fear, worry about, worship or love.

Remembering that our wealth belongs to God, helps us to see ourselves as stewards of our money. Rather than it being ours, it belongs to God and our job is to invest it well so that it brings glory to God.

Here are some great resources on money:

Free: Spending Your Time & Money on What Matters Most, book by Mark Scandrette

Thinking about Money, an ebook from The Everyday Faith E-series