Trading a Tennis Ball for a Bible

One student learns what was holding her back from God 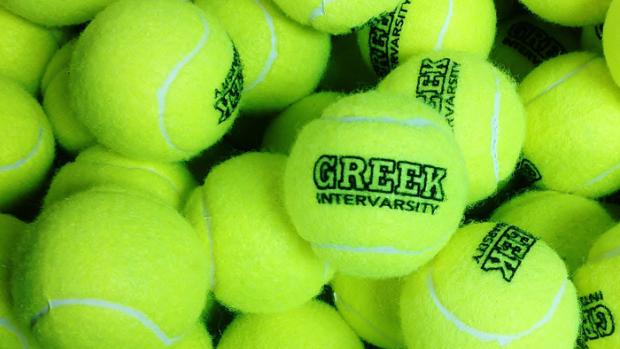 The main speaker at Greek Conference 2014 Indianapolis was Andy Dalton. He spoke about how we often hold onto ideas, thoughts, or things that negatively keep us from our relationship with God. For his illustration, Andy used the image of a tennis ball and what it would be like to physically drop it. A student from an Indiana campus connected with that image, and this is her story told by the Greek InterVarsity staff at that campus.

"It was a heart decision but a head decision for me too. That's why I wanted to come back and drop the ball on campus. So that's what I did. I waited until I was alone in my room, I prayed...and I dropped the ball."

Sara has a kind of crooked-but-genuine smile as she finishes the story.

There's a new-found confidence breaking through the insecurity that she normally carries. The same insecurity that had her snatching a Bible at Greek Conference when no one else was looking. "They asked us if we had a Bible and everyone seemed to have one. Except me. And I was a little embarrassed. So, I waited and got a free Bible from the pile after everyone else had left."

Sara went through the Connect concentration, where she was challenged to talk to Jesus. So she did. And at the end of about 40 minutes of time at prayer stations her summary was, "Well, it just wasn't enough time, really.”

During the general session time, the main speaker challenged the conference attendees to 'drop' whatever it was they were holding on to for their fulfillment, outside of Jesus himself. Sara remarked that she wasn't really sure what it was for her throughout most of the conference. "But when I got back to campus, it started to become clear; I always need to be in control."

The conference provided tennis balls to each Greek student at the conference as a reminder. Most of them were probably flung across parking lots and at the unsuspecting backs of fraternity brothers, but Sara’s has a different story.

Sara's ball hit her dorm room floor, sometime on Monday after the conference was over.

Dropping the ball was a symbolic step for her to drop her need to be in control. Now she is looking to Jesus for guidance, leadership, and hope. This is just one step, albeit a huge one, in a lifetime of decisions for Sara. It will be exciting to see her grow personally and with her sorority sisters over the coming months and years.

*Name has been changed.