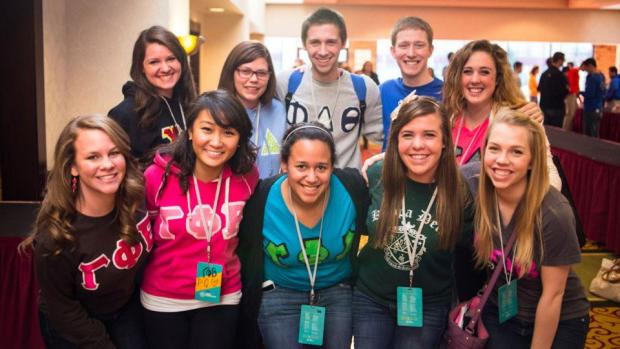 For example, at the Indy Conference alone:

Numbers are great, but stories help give flesh to statistics. Here’s a closer look at God’s work in the lives of individual students and schools through Greek InterVarsity.

God's Work in Students from the West

Greek InterVarsity as a movement started in the Midwest at Indiana University and the University of Illinois.But in the last five years, God has been starting new things at a rapid pace, raising up movements of Greek students in the West. In the past at Greek Conference, there have been a handful of Greeks who have attended from states west of the Mississippi. But this year, over 70 students from the western states, including Utah, Arizona, California, Nevada, Texas, Oregon, and Washington, attended Greek Conference. California schools alone brought over 40 students!

God is clearly at work in the Greek systems across our country, calling both students and staff who are willing to plant new ministries in an often unreached part of our country. Cheston, a Kappa Sigma at the University of Utah and one of nine students who attended the Conference from that school, shared one evening after the general session that God was calling him to let go of the comfortable life he could so easily have and to pursue vocational ministry after college. God is truly calling more and more Greeks across the country to “deny themselves, take up their cross daily and follow [him]” (Luke 9:23).

Bethany, a former student leader in the multiethnic InterVarsity chapter at Western Michigan University (WMU) and now a volunteer staff worker, was not part of the Greek system as an undergraduate. Yet God began to grow in her a love for Greek students and a desire to see them encounter Jesus. As a graduate student, she couldn’t join a sorority, but this didn’t stop her from reaching out to the Greek system at WMU. With the help of a GreekIV staff worker at a different school, Bethany launched a Bible study for the Greek system at WMU. The study started to gain momentum, and this year, she brought 14 fraternity and sorority students to Greek Conference! Six of these students reconnected with Jesus, and two have launched new ministries in their Greek chapters, with three more studies slated to start after spring break!
How Can God Use You to Reach Greek Students? God is clearly at work in the Greek systems around our country. He is raising up and mobilizing both Greeks and non-Greeks who care about fraternities and sororities and want to see him renew and redeem the Greek system. God is pressing forward. He is inviting us to partner with him in the work he is already doing. Are you willing to pray for Greek students? Are you willing to join God as he reaches out to every corner of our campuses? Could God be calling you to reach out to the Greek system on your campus?