What's in Our Hearts 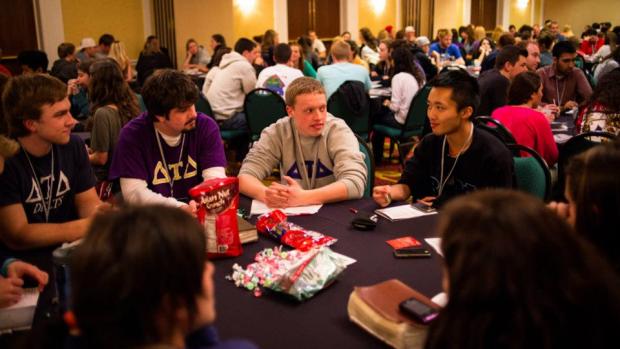 This week, news broke about a fraternity at Duke University who hosted a racist theme party. When I read the article from Duke and the subsequent blogs and comments, many emotions ran through me: shame, anger, frustration, and sadness—in part because I am a sorority woman and on staff with Greek InterVarsity. My calling is to serve Greek students and help them encounter Christ within the Greek system.

This is often confusing for people. Why would someone be passionate about reaching people often marked by negative stereotypes like racism and elitism? they wonder. But we Greeks actually hate the stereotypes about us and constantly talk about how we are philanthropic and gifted leaders who aren’t all obsessed with drinking and partying.

In my ministry role, I find myself continually acting as a bridge-builder between Greeks and non-Greeks, communicating why they’re a group worth loving and reaching. But events like the party at Duke make me feel like my efforts to defend and advocate for the Greek system are all in vain. In fact, my knee-jerk response when I heard about the incident was to distance myself, to say, “That’s not my Greek system.” I was ashamed of my culture, ashamed that an event like this happened—but also ashamed because it continues to happen.

How the Past Hangs On

The Greek system, like many of our current structures including a large number of public and private universities, has a complicated past with race. Many of the ethnic-specific fraternities and sororities on campus today were founded because the traditional ones in the early 1900s would not admit non-white students.

Greek systems on our campuses still struggle with racism

Although racial and religious restrictions to membership have long since been abolished, the Greek systems on our campuses obviously still struggle with racism.

As do many people and groups, I’d say. We still see racism in every facet of life. Many people who read the article about Duke probably thought, How disgusting. I would never participate in something like that. But deep in our hearts we’ve replaced this overt type of racism with a more insidious type: passivity.

What I See in Me

God has been bringing to mind an image of the moving sidewalks at the airport. Active racists are those who get on the walkway and continue to walk while also being moved by the walkway. Passive racists just stand on the walkway, not moving of their own volition—but sadly they’re still moving in the same direction as those who are actively racist.

Our inaction doesn’t cause anything to change. It just makes things worse.

It’s easy to look at the situation at Duke and others like it and blame the Greek system, the administration, or the individual members who permitted this to happen. But for me, the harder task is to examine myself. When I take a hard look inside, I see that I just want to put my blinders on and forget that something like this happened, just let it blow over. That’s just me being selfish and racist in my own way, though. Our inaction doesn’t cause anything to change. It just makes things worse.

I am writing this on the cusp of Greek Conference 2013. My role for the last three years has been director of the Influence concentration. In one of the breakouts for Influence, we challenge students to call out the practices in our Greek systems that do not honor God and others. Each year, racism is brought up but often takes a backseat to issues involving hazing and female objectification.

It would be easy for me to not mention the Duke incident at Greek Conference. It’s less messy that way. But as I’ve learned in the past, being intentional challenges passivity. So I’m committing right now, as I write this, to bring it up with students in our concentration and challenge them to engage dishonoring and racist attitudes within their Greek chapters.

If we serve a God who is truly about justice and reconciliation, then we as his people need to be about it too. So what does that look like practically?

From Passive to Proactive

It starts with repenting of our own passivity and apathy toward racism. And it starts with learning from someone who is a different ethnicity than us.

As Greeks, we want to fix problems when we see them, but we rarely pause to examine how we might be part of the problem and often fail to see the brokenness that resides in our own hearts.

This has been true of my own journey with ethnicity. God has blessed me with non-White friends and mentors who have cared for me and served me. They helped me understand that if I wanted to see reconciliation in my own Greek system on my campus, I needed to become a learner.

This started by attending events for the ethnic-specific and cultural-interest Greek systems and actually listening. On my campus, for example, the historically Black Greek system held a Q&A session about their organizations. I went and learned a lot. Out of experiences like that, I started to become friends with peers in the historically Black fraternities and sororities. These friends challenged my own assumptions about people of color, which began a healing work in my own heart.

White people have been given so much grace. It’s time for us to step up and stop passively watching racism happen on our campuses. Reconciliation is hard, but it is something God calls us to, and is actually an intimate part of the gospel.

The (Amazing) Mystery of Unity

In Ephesians 1:8-10, Paul writes, “With all wisdom and understanding, [God] made known to us the mystery of his will according to his good pleasure, which he purposed in Christ, to be put into effect when the times reach their fulfillment—to bring unity to all things in heaven and on earth under Christ.”

The great mystery and great news of the gospel is that God will bring unity! Christ makes this possible, and his death and resurrection are able to reconcile and heal the most broken relationships.

Are we going to partner with God to bring reconciliation? Are we going to confront a friend who is making racist jokes or comments? Are we willing to walk across campus and know and love someone who is different than us?

What are your first steps to move from passivity to reconciliation? Leave us a comment below.

Watch these videos to see how InterVarsity students and staff have engaged racial issues on campus through the years:

At Urbana 67 (one of the most racially tense times in the U.S. in the past century)