Where is God During Recruitment?

Choosing God in Your Chapter 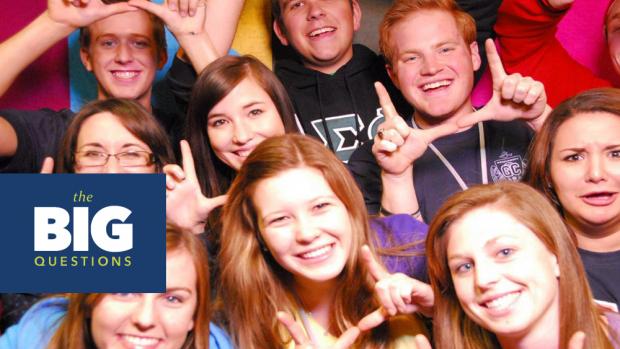 Recruitment. It brings a mix of emotions. For active sisters and brothers, it means early mornings and long nights, singing songs, talking up your chapter, and twisting yourself in knots to follow the rules and not say, “We will see you tomorrow!” For Potential New Members, it means butterflies as you pray that the women or men you meet will like you and choose you. Recruitment is the college version of choosing middle school kickball teams- all the same anxiety but with alcohol and high heels.

Recruitment can often mean tears, disappointment and asking how this can possibly be godly.

But what if there was another way to look at it? What if recruitment were a chance for God to be glorified?

When I first arrived at the University of Georgia-Athens (UGA), I saw roughly 1,500 women dressed up in their Sunday best, sweating as they traversed the mile and half road where the majority of our sororities reside. I heard women complain about how this was the worst experience ever and I had multiple women cry to me at night that they would be dropping out of UGA because they didn’t get the sorority of their choice. But as I looked at all of the amazing active sorority women and the phenomenal Potential New Members, all I could see was the potential to share Jesus’ love.

In the book of Daniel, the Babylonians have conquered the nation of Israel and kidnapped its best and brightest citizens. The book follows an Israelite Daniel and three of his friends as they are being trained to enter into the service of the King who had conquered their land. A corrupt country with plenty of wealth and lavish parties, Babylon was a place devoid of God. And yet, Daniel and his friends honored God and glorified him, by choosing to follow God, even when it seemed like following him would lead to death. By choosing God over the easy path of just blending into the culture around them, these four men actually wind up bringing glory to God.

While sororities and fraternities have never kidnapped students as far as I know, we can use this story as an example of how to see God in the midst of a seemingly dark tradition.

In John 13:35, Jesus says, “By this everyone will know that you are my disciples, if you love one another." At 5 am, when you are desperately trying to get the house presentable, you can glorify God, by choosing to serve your sisters instead of yelling at them to clean the bathroom. When your brother is completely wasted from the rush party and being ridiculous, you can choose to love him, rather than judge him. When people are talking poorly about a potential member, you can choose to love that member and shut down the gossip. As a potential new member, when other men or women are degrading a chapter based on gossip, choose to love the members you don’t know.

If you choose to love, especially when it is hard, God will be glorified and men and women in your chapter will notice.

Choose to honor those around you

Every year, I hear at least one Christian woman or man tell me how she or he isn’t going to follow the rules because they aren’t Godly, like making a decision on a woman in five minutes, rather than getting to know someone at coffee, or not mentioning the bible or religion in conversation. While I agree, that some of the rules seem a bit archaic, St. Paul wrote in Romans 13:1, 7, “Let everyone be subject to the governing authorities, for there is no authority except that which God has established. The authorities that exist have been established by God…Give to everyone what you owe them: If you owe taxes, pay taxes; if revenue, then revenue; if respect, then respect; if honor, then honor."

While I’m all for civil disobedience in order to fight for justice, ignoring the recruitment rules is simply denying that God had a hand in creating NPC, IFC, NPHC and MGC. It is incredibly hurtful to your brothers and sisters who are tasked with enforcing those rules, if we choose to not follow them. By choosing to honor those around you, you are showing them that God honors them. You are also honoring the Lord, by believing that he has authority over the Greek system, even when you do not understand.

Choose to find your Identity in Christ

After their medal winning dive, USA Olympians David Boudia and Steele Johnson said it best: “When my mind is on this [diving], and I'm thinking I'm defined by this, then my mind goes crazy. But we both know our identity is in Christ and we’re thankful for this opportunity.” Can you imagine how much God would be glorified if that was the attitude of Christians during recruitment? What if we didn’t stress about who got into our chapter or what chapters we got into? What if, instead, we were thankful for the opportunity to be a part of a system that allowed us to meet such wonderful people?

If we truly rooted our identities in Christ, would we choose to care more about people and less about our chapter’s standing? If we believed that we are loved by God and that was where we found our validation, would we be able to escape the madness that rules recruitment? Could you imagine how recruitment would change, if we chose God?

God Will Be Glorified

One year, a member of Greek IV, Sara, called me during recruitment. She said she hated recruitment because of how everyone got so mean and none of the potential members wanted to join anyway, because they were so bad at recruitment. I challenged Sara to see that time as a chance to really live incarnationally and to pray every time she wanted to yell. She started to bring sweets to recruitment that week and even hosted a prayer meeting before the start of each day. A member of her sorority, Jill, noticed. Jill started to come to their bible study, then Greek IV, then Greek Conference where she found Christ. She later led her sorority’s bible study. When you ask Jill why she became a Christian, she said it was because her sister Sara showed her love in the middle of recruitment, when no one else did.