Why does Greek IV believe it's possible to be Greek & Christian? 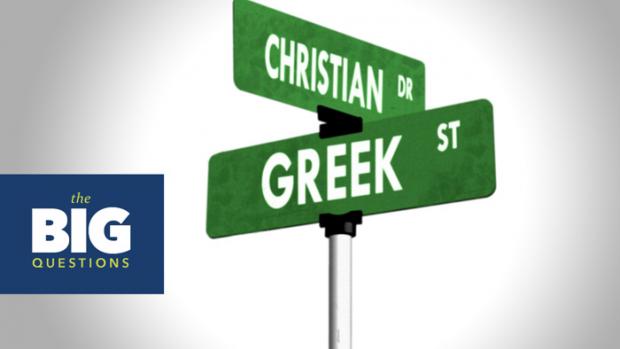 I think I might have heard an audible sigh of relief from my parents when I told them I was joining a fraternity. Not the reaction I’d expected.

I’d been your average good kid up until about the ripe old age of 16. And then I got involved in youth group and I’m sure my parents thought I’d lost it. I started doing some strange things, like talking about Jesus at home, reading my bible (almost religiously), and even a short stint of listening to Christian radio. In no uncertain terms, my mother lovingly asked, “Did you join a cult?” My parents went to church at the time, but that’s more or less where it ended.

And so with a sigh of relief, they presciently looked 6 months into my fraternal future and saw the certain doom of this ‘overly-spiritual phase’ their son was surely passing through.

And then something odd happened.

Instead of fraternity life crushing my relatively newfound connection with Jesus – this facet of my life only grew. How you ask? Enter Greek Intervarsity.

<blockquote class="leftpullquote>Instead of fraternity life crushing my relatively newfound connection with Jesus – this facet of my life only grew.<blockquote><span style=" line-height:="" 1.5em;"="">I’d been involved with the InterFraternity Bible study on campus, which brought guys from the frattiest houses on campus together to talk about fraternity life and how that intersects with following Jesus in college. And it wasn’t just Christians either; of the 15 to 20 guys that showed up every week, I bet about half of them didn’t follow Jesus. I was fascinated as I sat next to the linebacker of the football team, as he consistently broke the “1 f-bomb per week” rule. He would eventually come to know Jesus through the study.

Soon I connected to other guys in my fraternity house that were living out their faith in the less-than-friendly environment. And frankly, we caught some flak for it. But sooner rather than later, our brothers found us amiable, helpful and even fun compadres in the party scene. Who will call safe ride for you and remember to tell you where you left your car the next day? The Christians. Who will talk you down from fighting the All-Conference defensive end? The Christians. Who will help you clean up your puke from the cold dorm floor? Exactly.

So it turns out that there were more Christians in the Greek system than I thought possible. I figured there would be like 10, all huddled around in the basement of some building on campus with worried looks all around. Instead, I found a vibrant and thriving community, representing nearly every Greek chapter on campus. And there were about 120 people!

And so my faith grew during my four years of college – in no small part due to the Greek IV community that I was so fortunate to be a part of.

My story isn’t even that unique – there are literally thousands of students across the country that identify as ‘Greek and Christian’, are involved in local churches,Bible studies and Greek IV.
So why does Greek IV believe it’s possible to be Greek and Christian? Because we see it happen year in and year out. And moreover; it’s run by Greeks who lived this experience in their own college years.

Are there some tricky waters to navigate when it comes to being Greek and Christian? Certainly. The Greek system at times espouses values that are in conflict with the Christian life – even more than just the obvious ones like a culture of over-drinking and hooking up. Things like materialism and pride lurk under the radar.

Yet there are a number of values that are shared by both communities; values like brotherhood, service, leadership and justice. What’s more – these core values often lie at the center of Greek organizations, though they are sometimes minimized or downplayed over the years. Greek InterVarsity sees this as a tremendous opportunity.

Greek and Christian, eh? Certainly not mutually exclusive terms. However, it’s not as simple and just mashing these two identities together either. Greek InterVarsity seeks a harmonious balance of being truly Greek and truly Christian by calling the Greek system to the best version of what it was meant to be and can be once again. Greek and Christian? May it be so! (Sorry mom.)