Why not join a Christian fraternity or sorority instead? 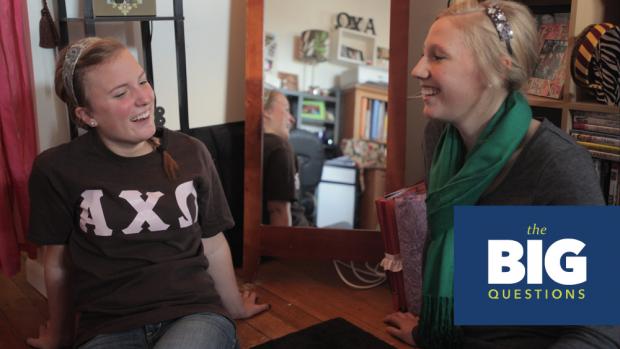 Why does Greek InterVarsity exist if there are already Christian fraternities? This is a legitimate question that we get asked often.

Why don’t we just encourage students to join Christian fraternities and sororities? Don’t we do the same thing?

Greek InterVarsity’s mistaken identity can be comical. We are not another fraternity or sorority. (We are also not an intermural sports league for fraternities and sororities, nor are we a club for students from Greece, but that's besides the point.) Sometimes this confusion can lead to freshmen missing out on a great tool on campus.

The difference between Christian fraternities and sororities and Greek InterVarsity is how we go about bringing Greek Life and Christ together.

We want to bring God’s kingdom to all the chapters that are affiliated with the campus.

Christian fraternities and sororities are chapters on campus that choose to live by Christian Guidelines as they define them. Most were started when men or women felt as though the Greek houses were not good options for Christians. Christian fraternities and sororities typically recruit new members that already agree with their statement of faith. Part of their chapter’s activities are designed to encourage and develop a relationship with Jesus. They want to help bring Jesus to the Greek System and they encourage their members to do that by living by example.

Greek InterVarsity does not represent one chapter; rather, we represent men and women from different chapters across different Greek Life counsels. We are diverse and open for anybody that wants to join us! We don’t believe that the Greek System is perfect, but because we love the Greek System, we want to bring God’s kingdom to all the chapters that are affiliated with the campus.

Where Christian sororities and fraternities offer places to learn about God and to live a Godly example, Greek InterVarsity offers a place for all Greeks, members of Christian chapters as well as every other chapter, to learn about Jesus, to explore your faith and to share your faith with your brothers and sisters. Greek InterVarsity trains student leaders to live incarnationally inside their fraternities and sororities to see their sisters or brothers transformed, their Greek chapter renewed and hopefully, world changers developed. We ask students to follow Jesus’ example in John 1:14: “The Word became flesh and blood, and moved into the neighborhood.” (The Message) Oftentimes, students have already moved into fraternities and sororities where there are people that do not know Jesus that they can share the gospel their brothers and sisters.

We offer resources and communities for Christians within the Greek System to see change happen in their houses; we even train Christian fraternity and sorority members to share the gospel in their house! We help students follow God into a place that we believe God cares deeply about.

So if you are a Christian who is thinking about recruitment, where should you go?

As I followed God into mission into my sorority, I grew closer to God.

In Mark 1, when Jesus calls the disciples, he said, “Follow me, and I’ll make you fishers of men.” Through recruitment, follow God to where he is going. While I was a student, I followed God into Kappa Kappa Gamma and saw Kappa transformed. I saw my friends accept Christ and I saw the house change. However, the biggest change was in my heart. As I followed God into mission into my sorority, I grew closer to God. Yes, there were temptations within my house, but because of the Greek InterVarsity community, I grew as a disciple of the LORD because I choose to pledge Kappa Kappa Gamma and with Greek InterVarsity’s help was a witness to that house.

So where should you go? You should follow God and go where he is calling you!  Whether you join a Christian house or secular house Greek InterVarsity’s doors are open to you, because we are not a chapter. We are a movement of students that want to see Greek Students know Jesus and we would love for you to join us.