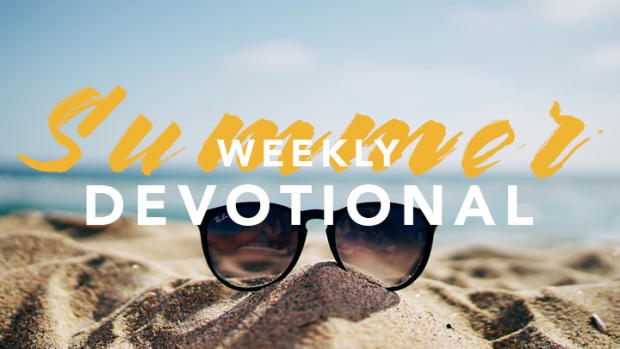 I love long, slow summer days. Hot days mean eating watermelon outside, swimming in the lake or laying by the pool, and reading a book while watching summer thunderstorms roll through town. At least at our house, hot days gives us a chance to relax a little bit, which is a different pace from our normal hectic lives.

But am I being lazy? Is enjoying watching a thunderstorm when I could be doing something more productive a waste of my time? How should I be spending my summer days?

In Scripture, we see that, after times of work, Jesus withdraws to a solitary place to reconnect with God. The passage we are going to look at comes after the apostles return from a mission trip, where they have proclaimed the Good News, healed the sick, drawn out demons and taught. This what Jesus tells them after they return.

30 The apostles gathered around Jesus and reported to him all they had done and taught. 31 Then, because so many people were coming and going that they did not even have a chance to eat, he said to them, “Come with me by yourselves to a quiet place and get some rest.”

32 So they went away by themselves in a boat to a solitary place. 33 But many who saw them leaving recognized them and ran on foot from all the towns and got there ahead of them. 34 When Jesus landed and saw a large crowd, he had compassion on them, because they were like sheep without a shepherd. So he began teaching them many things.

35 By this time it was late in the day, so his disciples came to him. “This is a remote place,” they said, “and it’s already very late. 36 Send the people away so that they can go to the surrounding countryside and villages and buy themselves something to eat.”

37 But he answered, “You give them something to eat.”

They said to him, “That would take more than half a year’s wages! Are we to go and spend that much on bread and give it to them to eat?”

When they found out, they said, “Five—and two fish.”

39 Then Jesus directed them to have all the people sit down in groups on the green grass. 40 So they sat down in groups of hundreds and fifties.41 Taking the five loaves and the two fish and looking up to heaven, he gave thanks and broke the loaves. Then he gave them to his disciples to distribute to the people. He also divided the two fish among them all.42 They all ate and were satisfied, 43 and the disciples picked up twelve basketfuls of broken pieces of bread and fish. 44 The number of the men who had eaten was five thousand.

Two things strike me as odd about this passage. The first is that right after Jesus asks them to rest, he seems disappointed when the disciples don’t want to feed thousands of people.

The second is the parallel language to Psalm 23, which would have been well known by the original audience of this gospel as well as the apostles. Jesus prepares a place for the people to sit, by still waters, on green grass. He then prepares a meal for the crowd. The apostles, who had complained about the crowds, watch as Jesus’ actions show that he is the good shepherd, who according to David, “refreshes my soul.” Jesus is acting like the good shepherd from Psalm 23.

When Jesus invites the disiples to be a part of the miracle of feeding 5,000 people, he is giving the disiples a chance to draw near to him, so that he can refresh their souls.

And it's the same for us: Jesus’ invitation is for us to draw near to him, so that he can refresh our souls.

April and May are full months for Greek InterVarsity staff. The day after I returned from a week-long camp for students, I was curled up on the couch with a cup of coffee in a catatonic state. Of course, in that moment, a student called and asked if we could have coffee right then. I tried to think of every excuse, but she was persistent that she needed to talk with me.

When I met up with her, she started to tell me that she wanted to know Jesus. Three hours later, we prayed together: she a new believer, and I fully refreshed! God knew that I needed rest but he also knew that rest could be found in “doing the work of the one who sent me”. Like the disciples, I had a preconceived notion of what I wanted my rest to be. But God wanted more for me, he wanted my cup to overflow.

It is good, especially after a season of busy ministry, to withdraw and reconnect with the God. However, sometimes reconnecting with God, means trusting that he is the Good Shepherd. Just like Jesus said, “My food is doing the will of the one who sent me”, our sustenance – everything we need to be recharged – comes from partnering with our Good Shepherd.

So, this summer, as you try to relax from a busy semester, withdraw and reconnect with God. Let him recharge your batteries and be open if he wants to recharge you, by having you serve 5,000 people with five loaves and two fishes.